After talking to them they offered me the opportunity to interview the authors of Knight Errant, Paul Barrett and Steve Murphy. The book was published this summer and even though it has a sequel that the authors are working on, it can be read as a stand-alone, for the story of Knight Errant wraps up.

But wait, what is Knight Errant about? 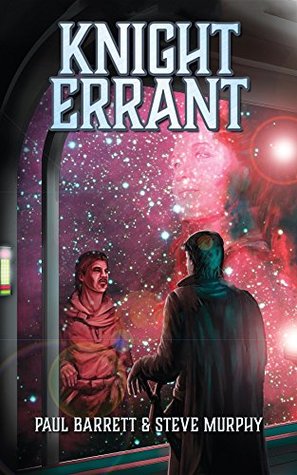 The Knights of the Flaming Star are the most feared and respected Special Operations teams in the known universe. There’s no assignment they can’t handle. No job they can’t complete. As a team, they’re unstoppable.

Then a rescue mission gone awry finds them betrayed by a ghost from their past.  Bent on vengeance their nemesis has laid a trap designed to grind their reputation into the dirt and ultimately destroy them.

The pursuit of their enemy will take them from planets run by corporate oligarchies—to a world entrenched in medieval technology and shrouded in magic. They’ll need every ounce of their will, prowess and cunning to turn the tables, salvage their reputation, and save the universe from apocalyptic destruction.

I am not much into science fiction but I have to say it sounds pretty interesting. If you also think that, definetely give the book a try and tell em what you think. Now, without further ado, here is my interview to Paul Barrett and Steve Murphy. I hope you enjoy it! I was so nervous about it.

First of all, thank you Paul and Steve for taking the time to answer my questions and letting everybody know a bit more about Knight Errant.

1. To start things off, let’s do a lightning round; it will be an associating game to get to
know you and your book. You just need to reply with the first word (or couple of
words) that come to mind. Ready?

a. Apart from writing, what else do you like doing?
Paul Barrett: Board gaming (Me: I love playing board games too!)
Steve Murphy: a good book and fine bourbon

b. If you could have any character (from any media) in Knight Errant, who would
that be?
Paul Barrett: John Wick
Steve Murphy: John Constantine (Me: oh yeah, I love Constantine!)

d. Do you think you’d make a good Knight?
Paul Barrett: No, I’m not nearly brave enough.
Steve Murphy: Back in the day, yes.

e. What song do you associate with Knight Errant?
Paul Barrett: Any song on the Conan the Barbarian soundtrack
Steve Murphy: Great Gig in the Sky by Pink Floyd

2. This is the first book you have written together. How did the idea come to life?
The initial character of Hawk was Steve’s, who he saw as a space pilot of some sort who had an enigmatic relationship with his spacecraft. From there we just sort of spitballed ideas on what would make a good story. Keep in mind the initial idea came about 30+ years ago, so much of the details have been lost in the mists of time. Over several months we threw concepts back and forth and wrote the first chapter, which was originally Hawk walking through saloon doors on a “Westworld” style planet and getting into a gunfight. Very cliché, very generic. Eventually, it morphed into the opening chapter as it stands now. So, in short, it started with a man and his spaceship and grew from there.

3. How was the process of cowriting a book?
Funny, we’re working on a blog post about this very topic. Overall, the process was smooth and straightforward. It was also, on this one, very staccato. We started the story in 1987, wrote for a while, got a first draft, then life interfered and we didn’t write for over twenty years. Paul would occasionally spend time tweaking the story and making changes based on feedback. Then three years ago, Paul and Steve jumped back on the book, hammered out the rough spots, polished the dialogue, and made the action sequences more tactically sound, based on Steve’s military and police training. We work well together, since we have different but compatible styles. Steve tells the story and Paul shows the story.
(Me: I cannot wait to read that post, I am fascinated by how authors work together)

4. What drew you to write a science fiction story? Were you fans of the genre?
Paul Barrett: I was always more of a fan of fantasy than hard sci-fi. Obviously, JRR Tolkien was a big influence, along with the Conan series. So that’s why Knight ended up having a great deal of fantasy influences in it too. It’s not hard-core sci-fi. If you want Asimov, we’re not your guys. If you like Guardians of the Galaxy, then you’ll love Knight Errant.
Steve Murphy: I got hooked on science fiction through Dune and the Edgar Rice Burroughs John Carter series and then on to Orson Scott Card. My love of fantasy was fueled by almost non-stop Dungeons and Dragons sessions. They say write what you know, but I didn’t want to write a police novel or military novel, so instead I used some of that knowledge to write the kind of story I like.
(Me: I do love those comparisons)

5. In the book we’re introduced to the Knights of the Flaming Star, a Special Operations team. Are there other teams in the book? What made you write about the Knights, why are they so important?
It’s implied that there are other teams because the Knights work for a government agency called Force 13, but there are not specifically any other teams in this book. The Knights are important because they are one of the best teams in Force 13, and their tortured history and the events that lead up to the beginning of the book make them interesting characters with a number of personality flaws and quirks to explore.

6. What character do you associate yourself with? What character was the most difficult to write about?
Paul Barrett: Ashron is pretty much me with green skin, a snout, and far better aim with a firearm. We share the same sarcastic, slightly demented sense of humor. And we both love mustard. Wolf was probably the most difficult because, by nature, he is taciturn, and dialogue is often the way you get personality across, so to figure out how to make him interesting and engaged while not having him speak much was a tough balancing act.
Steve Murphy: Hawk is my guy. He was the character that started the whole story and is closest in personality to me. The toughest for me was Trey, trying to maintain a balance between mentally tortured child and innocent young boy. Figuring out a way to integrate him into the crew and make him something more than the plucky kid we rescued proved difficult. I didn’t want him to be the typical, gee golly character so many kids can be in these kinds of stories.

7. The characters you mentioned in question 2 are thrown into the book you are currently reading. How do you think they are going to do? Who do you think will do better? Who do you think will do worse?
Paul Barrett: I’m currently reading Good Omens by Pratchett and Gaiman, so John Wick would be a bizarre addition. I suspect he would do well up until the point that he ran up against the angels and demons. Then all the gun-fu in the world isn’t going to help him.
Steve Murphy: I just finished The Way of Kings by Brandon Sanderson. Constantine
would fit right in, because he would totally end up being one of the Knights Radiant
and kick some serious Voidbringer butt.
(Me: this question was badly written because I changed the order of the questions a lot and they were supposed to be about question 6, but I liked the replies they came up with!)

8. You both have had such interesting yet different career choices. Paul, you’ve touched on music, theatre, technology and the movie industry; and Steve, you have served your country for many years now; was there any experience, person or situation that made it or inspired the creation of Knight Errant?
Paul Barrett: Working in the movie industry helped me learn the various ways to tell a good story, so I brought much of that to the book. Otherwise, nothing much. Although if Ashron ever had to run a spotlight or set up a sound system, I’ve got it covered.
Steve Murphy: Not the creation, but certainly the development of the teamwork and
tactical matters were influenced by my career. Before, the Knights were just a group of people bumbling their way through things, and they evolved into a team who knew how to work together, support each other, and think strategically under pressure.

9. Sometimes synopses tell you the whole story or fail to embrace what the book is really about. Yours is a good mix, giving the reader what is necessary to catch their attention but without giving away too much. What would you like your readers to know before reading the book?
We would like you to know some cool things about the spaceship, but we can’t say much because there would be too many spoilers. Also, be aware that it’s not a hard sci-fi story. There’s a good deal of fantasy and we don’t necessarily adhere to the laws of physics in certain aspects.

10. Finally, where can readers find you online? Do you have other projects planned? Either together or on your own.
Paul Barrett: I have two websites. Paulbarrettonline.com and producerpaul.com. My
twitter is @producerpaul. We are working on the second book of the Knights series.
(And keep in mind, Knight Errant is a standalone story, so don’t think there’s going to
be a cliffhanger that you have to wait two years to see resolved). I’m also working on A Cry of Decay, which is the second book in my Necromancer Saga. And there are always lots of ideas swirling around.
Steve Murphy: cowsdontcare.com and my Twitter is @cowsdontcare. Obviously, I’m
working on the second book of the Knights series. I’m working the first draft while Paul finishes his revisions on his Necromancer book.
(Me: Necromancer is Paul’s other series; you can check out about book 1, A Whisper of Death, here)

Thank you so much for answering my questions and to Fiery Seas Publishing for getting in touch. It was a pleasure to ask the quesion and read your answers 🙂

What did you think? Are you intrigue about the story? Did you know about this book?

If you want to support or help me, here's my amazon wishlist 💖